What a difference a year makes

This time last year was probably my lowest point as a mummy. I'd spent most of the afternoon in A&E with Monkey after her arms and legs had swollen up and she'd got very wheezy.

A&E sent us down to the children's observation and assessment unit who decided to admit her. It was about this time when we went onto the ward. Monkey was in a lot of pain and crying lots. We were quickly moved to a private room so we didn't disturb all the other children.

All day as we were moved from one department to another I'd kept it together. But when we finally got Monkey to sleep and my husband and mum left the hospital, I cried. There had been something going on with Monkey from the day she was born and the last month had been horrendous. We'd been sent to the hospital loads of times but this was our first overnight stay. She looked so tiny and helpless in that hospital cot. And I didn't feel like there was anything I could do to help her. 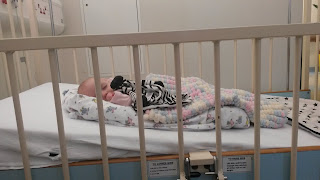 Fast forward a year and I'm feeling so much more positive. We ended up in hospital for five nights and although it was horrible it did mean we finally got Monkey's allergies confirmed and came under the care of a consultant and dietitian.

Monkey is doing great now. She's still small but she is back on the chart and following her line. She's happy and smiley and into everything. She loves her food which can be tricky as she still doesn't understand that some foods make her poorly.

We still don't really know what will happen with Monkey's allergies. There are no plans to reintroduce any of the main allergens until January at the very earliest. There is talk of more tests as she gets older but in the meantime we are just enjoying life. I still worry and there are still days where it's all a bit overwhelming but on the whole as long as we avoid certain foods everything is fine. Just look at the difference a year makes! 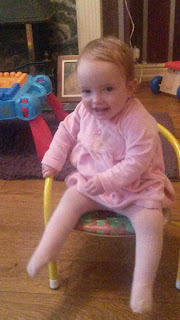