My god daughter turns 3 on Tuesday and yesterday was her party. It was an early start for Monkey and me as we had to get a train over to Yorkshire. It was worth it though!
We'd been told the party was at a farm. Monkey loves animals so I knew she'd enjoy it. Having visited a few farms close to home I thought I knew what to expect, I wasn't expecting Ponderosa.
From the moment we arrived I knew that it was going to be a great day. It helped that the sun was shining, after a week of rain I was dreading a day on the farm but it almost felt like summer! The party started in the play barn, a soft play area for kids up to age 8. They had a separate baby part for age up to two which should have been perfect for my little monkey, didn't stop her making a bid for freedom and trying to join the big kids though. 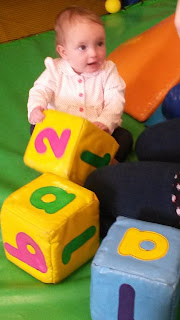 From the play barn we headed up to one of the party rooms for food. Party food still terrifies me with all of Monkey's allergies so I'd made a packed lunch. I was pleased to see they had catered for a little girl with a dairy allergy though and seemed to take it seriously. Monkey still managed to get a bowl of jelly which she loved. 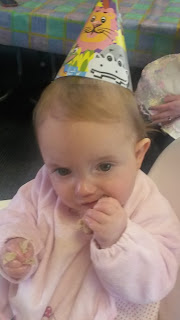 After our food we were free to explore the farm. I thought it would take about an hour but we were there all afternoon and could have spent even longer. It's an amazing place - the animals all looked happy, it was spotlessly clean and the grounds were beautiful. There were more animals than I was expecting. Your usual bunnies, horses etc but also more unusual ones like marmosets and meerkats. 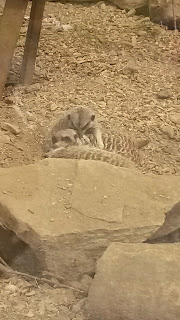 There were lots of play areas around the farm which my god daughter loved but they didn't have any baby swings so Monkey couldn't join in. Right at the very bottom of the farm made up for it though. They had a beach area, which was basically a giant sandpit. She loved playing in there and with the beautiful weather it almost felt like we really were at the seaside. 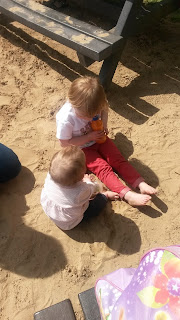 So there you have it, our day at the farm! We had so much fun and Ponderosa is definitely on the list of places to visit over the summer.

Welcome to our new blog. Here's a bit about us.

Monkey is 11 months old and full of mischief. She loves dancing, animals, stories, playing with her friends and eating. She's allergic to dairy, soya, eggs, wheat, apples and pears but doesn't let it stop her enjoying her food.

Mummy is thirty something. Loves football, writing to her penpals, shopping but most if all she loves being monkey's mummy.

We have lots of fun and adventures together and we're looking forward to sharing them with you
Posted by Unknown at 20:39:00 No comments: