Today has been a good day. I didn't think it would be though. In fact, I've been worrying about it for a while. Today we met Monkey's new dietitian for the first time.

I'd spoken to her on the phone a few times and she seemed lovely. That wasn't why I was worried. My GP is asking for a medication review for Monkey and that combined with lots of people talking about reintroduction aged one had left me feeling stressed.

I last spoke to the dietitian on the phone in May. At that point we agreed to try her with a bit of wheat and see how she got on. It didn't go well. I only put one stock cube in tea for the three of  but it definitely affected her. Her skin was a mess, she had weeping eczema behind her ears, coughing, wheezing, bloating and bad nappies.

I'm not against reintroducing foods to Monkey's diet. In fact I would love to as it would make life so much easier for both of us. I carried on going with the wheat for a few days as I thought I was just being paranoid and waiting for a reaction. When other people started noticing her reactions though I knew it was time to stop.

Our phone conversation in May had talked about introducing wheat to make the milk ladder easier and then to use the milk ladder to reintroduce dairy aged one. And that's why I was so worried. I thought they would make me carry on with wheat and introduce dairy too. I do want to do that, I just don't think she's ready yet. It's taken us such a long time to get her to a point where she's well and happy, I don't want to ruin that now.

I really had no need to worry though.. The dietitian was lovely. When I spoke to her on the phone she had thought her weight in pounds was her weight in kilograms so was much less worried about her as she thought she was quite big. She was surprised when she saw her but once she got all her notes and charts out she said she is small but was growing well.

After looking at everything the dietitian has said that Monkey's allergies are far too severe and acute to be thinking about reintroduction yet. While severe and acute sounds a bit scary it was a relief that nobody was asking me to do a reintroduction plan I felt uncomfortable with. We've agreed that I'll try her with some apples or pears as I think her problems with these might be related to her GORD rather than being a true allergy. If this goes well we may try a bit of well cooked egg but anything more than that is being left until she's at least 18 months old. 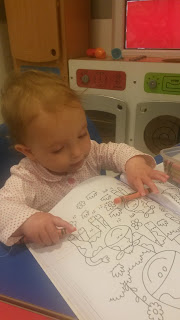 I might have been worried this morning but once again Monkey took it all in her stride, making friends with all the staff and looking very grown up sitting at the table to do her colouring in. She's such a brave little thing and I'm so lucky to be her mummy :-)
Posted by Unknown at 22:07:00