Today I want to talk about guilt. I know as a parent it's part of the territory but a lot of my parenting guilt seems to be centred around Monkey's allergies. 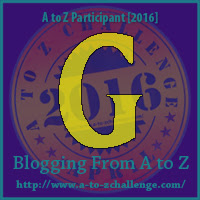 So G is for guilt and I'm going to share with you some of the things I feel guilty about.

At ten days old Monkey was in hospital due to concerns about her weight. They were making me pump milk for her so they could see exactly how much she was taking (plenty as it happens - but not from a bottle!). Somebody decided that whilst I was attatched to this machine would be the perfect time to take blood from my tiny ten day old baby.

Now really there were two sensible options here - take her away so I didn't have to see it or let me hold her, cuddle her and let her feed if she wanted to. None of these happened. Instead they put her on the bed, just out of reach while I was still attatched to their machine and told me we'd both feel better if we could see each other.

I didn't feel better. And neither did Monkey. I still remember her looking up at me with these big innocent eyes. They struggled to get the blood. It must have hurt her and scared her and she was all on her own. I still feel guilty that I let it happen. I was a new mum and overwhelmed with everything that was happening. She will never be on her own for any tests again though.

At about two months after weeks of crying and terrible nappies the Health Visitor sent me to the GP and the GP sent me straight to the hospital. More guilt! I just thought all babies cried and pooed but they were worried about her. I should have known, I should have took her sooner.

Monkey's first allergy was dairy - diagnosed at three months. Nobody seemed to have a reason why but I was convinced it was something I had done (or not done) during pregnancy or those first few months that had caused it. During pregnancy my craving was cheese flavoured things and I practically lived in Hollands cheese and onion pies and Walkers cheese and onion crisps and I still think that had something to do with it. I've lost count of the experts who've told me it doesn't but it doesn't take away the guilt.

After we knew about Monkey's allergies I was advised that long term it would be best to carry on breastfeeding but that it would take up to six weeks for the dairy to leave my system. This was probably the time when I felt most guilty. Every time I fed her I felt like I was poisoning her, she would be ill after every feed.


I don't want this post to be all doom and gloom though so as well as all the guilt I'm also super proud that we've come through the worst of it and have a happy smiley Monkey.
Posted by Unknown at 20:50:00