Our day out in Buxton

We've had a girl's day out today - me, my mum and Monkey. We've been over to Buxton where we had a lovely day this time last year when Monkey was still a brand new baby.

The day was similar in lots of ways. We visited the same places but Monkey was much more involved this year and had lots of fun.

It's about an hours drive from  our home in Manchester to Buxton so we were all ready for a drink when we got there. We headed straight for Number 6 tea rooms. Now Monkey has decided she's too grown up for breast milk I can eat what I want again so I treated myself to a cheese scone and hot chocolate with all the trimmings. I felt really guilty though, we shared the restricted diet for so long I feel awful for leaving her behind.

There wasn't much that Monkey could eat but that was more down to the combination of her allergies than them not catering. They had a good selection of gluten/wheat free options and seemed to be quite allergy aware. It was no problem for them to cook a slice of bacon for Monkey - and they didn't even charge us for it! 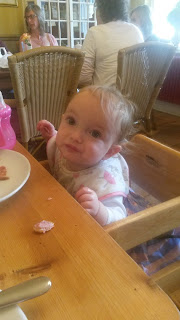 Once we were all refuelled it was time for the park, or Pavilion Gardens to give it it's proper name. We had a bit of a walk through the gardens but really we were just on our way to the swings. Monkey loves them. Walking towards the play area it looked quite busy but it wasn't too bad and she was able to get on the swings straight away. 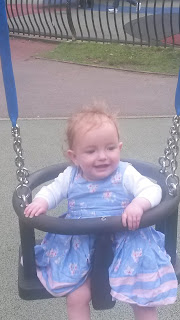 The play area is designed so the toddler section is seperate from the bigger kids so even though it was busy I still felt safe letting Monkey explore. The swings are definitely her favourite but she enjoyed the slide, bouncers and roundabout too. 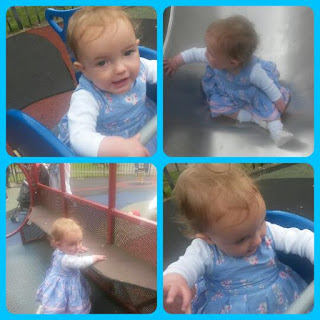 After the play area we headed for the mini train. It's only £1 to go round twice and it's free for kids under 3! I wasn't too sure what Monkey would make of it but she had a big grin all the way round and her giggles as we went through the tunnel were amazing. 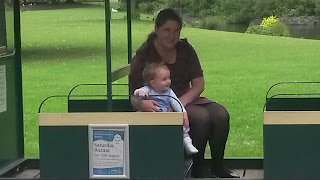 We were hungry after all that fun and I could tell Monkey wanted to be off and stomping about. I can't really put her down outside as I can't get shoes for her anywhere ( that's a whole different post...) so we went to the cafe in the gardens which has a toddlers soft play area.

I'm going to go into rant mode here - why when something is very clearly called a TODDLERS play area do people let their 7,8,9 year olds play in there. They seemed like nice kids but they were big and boisterous and I was slightly worried about Monkey being trampled.

Monkey didn't seem bothered though. She's really sociable and honestly has no idea she's tiny. She was straight off, climbing to go and join in with the big kids. 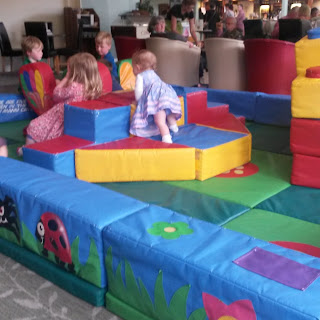 By the time we'd finished eating and playing our parking had run out and it was time to head home. We had a really lovely day.
Posted by Unknown at 08:57:00